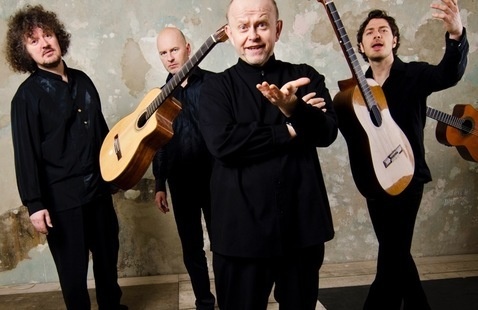 This year the LMU Guitar Festival is pleased to feature the European Guitar Quartet, both as a full ensemble and in smaller duos.

"The birth of a sparkling new star in the concert sky."

These were the words which the German press used to describe the ensemble's debut concert in Dresden in the spring of 2012. The meeting between two global stars of the classical guitar (Zoran Dukić and Pavel Steidl) and two of the most outstanding protagonists of the acoustic guitar scene (Reentko Dirks and Thomas Fellows) was accompanied by enthusiastic appreciation from both critics and audience alike. It was therefore no surprise that their debut was followed by invitations to festivals around the world, which include major festivals in Scandinavia and Germany (Bergen Music Festival, MDR Musiksommer) as well as other prestigious events in Austria, Switzerland, India and South America. Fellow musicians such as Klezmer legend Giora Feidman have also been quick to voice their admiration for their music.

"DANZA" would be a fitting title for the quartet's current program, as it combines the intense, virtuoso, spirited music of South America and Europe to take listeners on a thrilling musical journey. Unique interpretations of pieces by Astor Piazzolla and the dances of the Paraguayan guitar legend Agustín Barrios mingle with the melodious compositions of the masterly Nicolo Paganini and the complex rhythms of Balkan dances (Dušan Bogdanović). Works by Thomas Fellow and Reentko also feature, and present concert music, world music and jazz in a contemporary embrace. These four musicians, each of them a renowned performer in their own right, have set themselves the task of blending the instrument¹s concert tradition with the expressive, dynamic sounds of modern music.

The European Guitar Quartet - a summit of guitar music.