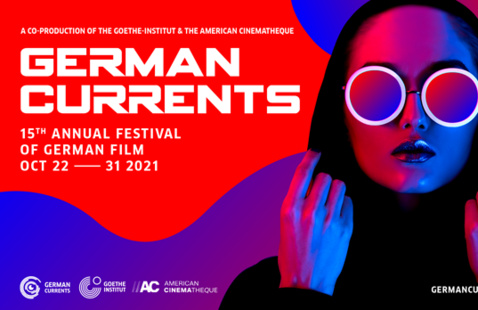 German Currents has become a mainstay of Los Angeles' cultural calendar and a highlight for film-goers throughout Southern California. Celebrating its 15th edition this year, German Currents returns to the American Cinematheque and the brand new Goethe-Institut space in the MacArthur Park neighborhood as a hybrid event including special in-person and virtual cinema screenings. As we return to theaters and in-person screenings, we are reminded of the power the cinema has to bring people together. This idea of the cinema as a space for community, dialogue, and exchange is at the heart of German Currents' goal to present the best of current German films to a broad and diverse audience.

We are excited about welcoming audiences back to the theater to share and enjoy this experience together. With our virtual Cinema platform, introduced last year, German Currents expanded its outreach, offering a unique chance to share the festival program with a larger audience and grow as a community of cinema fans. This year, we will present a diverse selection of thought-provoking films and discussions to our virtual cinema viewers for this year's program.

German Currents 2021 will open with an exclusive in-person screening for the North America Premiere of Detlev Buck's amusing and visually dazzling period piece CONFESSIONS OF FELIX KRULL, based on Thomas Mann's novel of the same name. Next, Sarah Winkenstette's multi-award-winning children's feature TOO FAR AWAY will celebrate its Los Angeles premiere at a special family matinee screening at the Goethe-Institut. The festival will close its in-person program with the West Coast premiere of acclaimed filmmaker Dominik Graf's FABIAN - GOING TO THE DOGS, which recently received 3 German Film Awards.