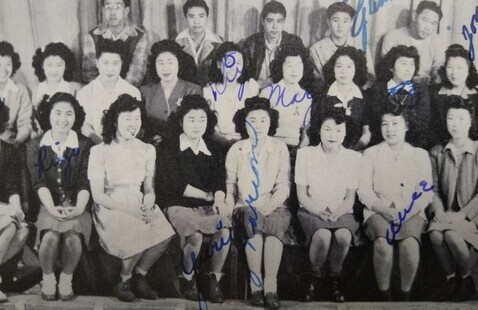 The William H. Hannon Library will hold a special Japanese American Day of Remembrance event on Wednesday, March 9, at 4:30 p.m. This program will highlight a new addition to the library’s collections: the Ichikawa Family Papers.

This Japanese-American Catholic family lived in downtown Los Angeles until 1942, when the U.S. government forced them to move to Heart Mountain Camp as a result of the unjust incarceration of Japanese Americans under Executive Order 9066.

Julia Lee (English), and Eric Haruki Swanson (Theology) will discuss how students in their courses made use of special collections materials like the Ichikawa Papers and the Honda Papers. Curtiss Takada Rooks (Asian American Studies) will address the significance of incarceration and reparations in light of today's anti-racist and DEI movements.

Additionally, the library will host a pop-up exhibit of remarkable items from the Ichikawa collection at the same time, including a painting by noted Issei artist Jichiro Miyauchi.

Julia Lee is an associate professor of English at Loyola Marymount University, where she teaches courses in African American and transatlantic literature. Lee was born in Los Angeles and received her undergraduate degree from Princeton and Ph.D. in English from Harvard, where she studied under Henry Louis Gates, Jr. and Jamaica Kincaid.  Lee has taught at University of Nevada, Las Vegas and University of Southern California, where she was a Provost’s Postdoctoral Scholar in the Humanities. Lee’s first book, "The American Slave Narrative and the Victorian Novel," was published by Oxford University Press in 2010. Her second book, "Our Gang: A Racial History of “The Little Rascals,”" was published by University of Minnesota Press in 2015. Lee has written for the Atlantic, the Huffington Post, and Zocalo Public Square. She is currently working on a cultural history/memoir about growing up Asian in Black and White America, forthcoming in 2023 from Henry Holt.

Eric Haruki Swanson received his undergraduate degree from Indiana University Bloomington, his M.A. from Koyasan University in Japan, and Ph.D. from Harvard University. As a cultural historian he is interested in the study of religious traditions through the examination of literature, visual material, ritual practices, and performance arts, and considers the role of religious institutions and its actors within broader cultural patterns, political agendas, and expressions of identity. His research focuses on the interactions between Buddhist institutions and the ruling class during times of political crisis and social unrest in pre-modern Japan. His current book project is a study of scholar-monk Jien (1155-1225) and his establishment of exoteric-esoteric Buddhist ritual programs for the pacification of vengeful spirits and the restoration of order in the medieval capital of Japan.

Rooks earned his B.A. in 1979 with a double major in economics and Asian studies (honors) from Dartmouth College. He received his M.A. in public policy from Trinity College in 1982 and his Ph.D. in comparative culture from the University of California, Irvine. In 1996, he was a University of California Regents Fellow. Prior to his appointment at LMU, Rooks was a tenured assistant professor in Asian American studies at San Jose State University. His research interests include applied community-based research focusing on cultural competency in community health and ethnic community development. Current projects include a cultural assessment of Japanese and African American senior care-giving needs and community partnerships in chronic disease needs assessment in the Samoan community. A second research trajectory focuses on Asian American multiracial identity and diversity.

About the William H. Hannon Library

For more information about this event, contact the library's Outreach & Engagement Department at library.outreach@lmu.edu.

Exhibitions and Performances Speakers and Seminars Diversity, Equity and Inclusion