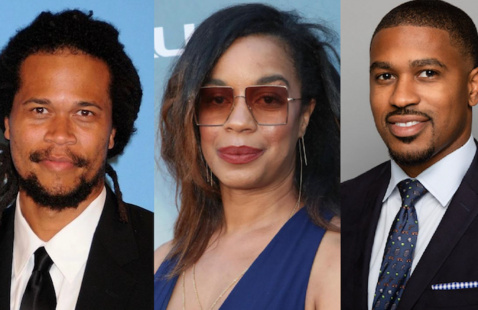 Don't miss out on the opportunity to connect with esteemed Black filmmakers, show runners, and agents in Hollywood! Attend the panel discussion to learn about their journeys in the industry and extensive knowledge they wish to impart. Stay tuned for the breakout sessions: Honest conversations about the challenges faced by BIPOC writers, filmmakers, and showrunners, who will aid your transition from graduation to the professional playing field. Moderated by SFTV Assistant Professor of Screenwriting John Strauss and SFTV graduate student Mikayla Gingrey-Osborne.

Allison Davis is a writer and producer whose most recent work includes The Underground Railroad (Amazon TV) and David Makes Man (OWN and HBOMax). She also wrote and produced for the 11th season of Horror Story and 61st St. (AMC). Previously, Davis was Senior Writer and Story Producer at Google and the Associative Artistic Director of the Museum of Contemporary African Diasporan Arts, where she oversaw all programs and exhibitions.  As a writer, she has worked with many museum and theater productions, including PBS where she was the series writer for AfroPop on PBS. She also contributed to The Hairpin, named one of Forbes’ top 100 best blogs for women, as well as many other well-known magazines. As an independent producer, Davis worked on national broadcast/web campaigns, documentaries for PBS’ Independent Lens and POV, and produced many short films and stage productions.

Davis holds a BA in Visual and Media Arts from Emerson College and, through a departmental fellowship, an MFA from NYU's Tisch School of the Arts in Dramatic Writing.

Brandon E. Lawrence is a Television Literary Agent at the Creative Artists Agency (CAA), who represents writers, producers, directors and actors. Lawrence began his career at Bank of America Merrill Lynch as an Investment Banking Analyst in its Global Financial Institutions group. He went on to work as a Financial Analyst for USA Network and joined CAA in 2013.

Lawrence graduated from Morehouse College with a degree in Business Administration, concentrating on Finance. He was recently selected as one of the youngest members to join 100 Black Men of Los Angeles and was honored as one of the Los Angeles Empowerment Congress’ Top 40 Under 40 as a community leader who excels in civic engagement, advocacy, and philanthropy.

Seith Mann is an American film and television director best known for directing the award-winning Five Deep Breaths, his thesis at New York University, and episodic television for Elementary, Homeland, The Walking Dead, Rectify, Nurse Jackie, Californication, Unforgettable, Dexter, Friday Night Lights, Entourage, Sons of Anarchy, The Wire, and Grey’s Anatomy. He also created and directed the television hip-hop drama The Breaks, which was the basis for the television series.

Mann graduated from Morehouse College and later earned an MFA in film at the Tisch School of the Arts at New York University, where he studied with Spike Lee.

About the SFTV Equity Council: The SFTV Equity Council convenes to discuss and construct SFTV-specific approaches to the challenges we face in building an equitable, diverse, and inclusive SFTV community. The council is made up of SFTV faculty, staff, and student representatives, and encompasses five additional subgroups focused on Climate and Culture, Communications, Education and Training, Hiring and Research. The SFTV Equity Council received a Capacity Building grant from the University Intercultural Council to fund this program.