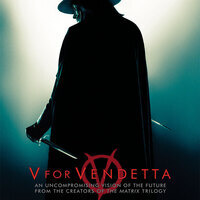 Justice and Spirituality on Screen: "V for Vendetta"

The CSJ Center for Reconciliation & Justice invites you to this Justice and Spirituality on Screen discussion of V for Vendetta, a 2005 feature film directed by James McTeigue and written by Lana and Lilly Wachowski, based on the 1988 DC/Vertigo Comics limited series by Alan Moore and David Lloyd.

The CSJ Center's Justice and Spirituality on Screen series engages questions of faith and culture through the lens of modern cinema.  It is cosponsored by the LMU School of Film and Television and the LMU Center for Religion and Spirituality. The 2020-2021 series theme echoes that of the CSJ Center's annual symposium, Faces of Justice.

To Participate
Due to pandemic and screening restrictions, films will not be be publicly screened. However, guests are invited to participate in the traditional post-screening discussion, which will be held online via Facebook Live. No RSVP is necessary. Please visit the CSJ Centers's Facebook page (be sure to "like" to recieve updates about these discussions). For more information, contact Ms. Stefani Mejia at the CSJ Center at stefani.mejia@lmu.edu.

Watch the Film
At the time of this posting, V for Vendetta is available for online streaming via the following platforms: Amazon Prime, Apple iTunes, Netflix, YouTube, Google Play.

For those in LMU community, check to see the availability of this film for streaming via one of the Hannon Library streaming databases, such as Kanopy or Swank Digital Campus.

Discussions will be live-streamed at https://www.facebook.com/CSJCenterLMU. Participants will join the Q&A via the comment section.