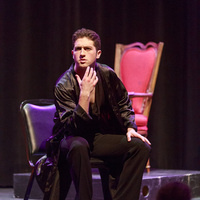 Equally Divine - The Real Story of the Mona Lisa

In this music theatre piece, performed by The Core Ensemble, Mona Lisa comes to life, recalling famous men who have been obsessed by her: Picasso, Napoleon and King Francis I of France. What actually happened between Leonardo da Vinci, the original Lisa, and Leonardo’s male lover during the creation of the world’s most famous painting?

“Equally Divine” celebrates gay history not as marginal and closed, but central and important in Western culture and makes insightful statements about women’s empowerment. The work features a solo actor, with music ensemble of cello, piano and percussion performing Italian music from the time of Leonardo and works by Stravinsky, Weill, Satie, Poulenc, Marjorie Merryman and Rand Steiger.  “Equally Divine” is a celebration of the artistic genius Leonardo da Vinci and a fascinating exploration of gender identity.