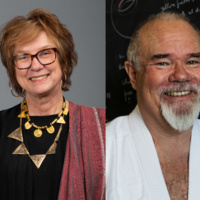 The sixth Faculty Pub Night of the 2018-2019 season features Theresia de Vroom, Professor of English in LMU's Bellarmine College of Liberal Arts, and Michael Berg, Professor of Mathematics in the Frank R. Seaver College of Science and Engineering. De Vroom and Berg will discuss their recent publication, “The Past is a Foreign Country”: Two Eye Witness Accounts of Life in the Japanese Concentration Camps in Occupied Indonesia and the Chaos that Followed, 1942-1949.

Students, staff, faculty, alumni, and any members of the public are all invited to the 2018-2019 series of Faculty Pub Night at the William H. Hannon Library. Eight LMU professors (four per semester) are selected annually to discuss their latest publication or project in a comfortable setting and format that welcomes diverse perspectives for an inclusive conversation aimed to educate the entire community. All Faculty Pub Nights are free and open to the public. Pub refreshments and snacks will be served courtesy of the William H. Hannon Library.

The Past is a Foreign Country portrays a holocaust of sorts—one not well known outside the community it affected—a community that is now in danger of extinction. The book gives evidence to the internment experience of former colonials, both Dutch, European, and mixed-race, in Indonesia under the Japanese during World War II. Those giving testimony include the unknown writer of a graphic novel; selected cartoons drawn by a boy once interned; an account of another boy's experience in the camps; an account of a young girl's experience living outside the camps; and access to a film that documents life outside the camps. In addition, Berg and de Vroom, whose family members suffered the internment and its aftermath, share their experiences.

Michael J. Berg is a Professor of Mathematics at Loyola Marymount University. His primary areas of teaching and research are algebra and number theory (especially analytic methods vis-a-vis higher reciprocity laws), and non-Archimedean Fourier analysis. Berg received his Ph.D. from UC San Diego 1985 and his B. A. from UC Los Angeles in 1978. He joined the LMU faculty in 1989. Among other things, he is an instructor of the martial art of Judo. He lives in Westchester, California with his wife, Barbara Berg, their six children, and one dog.

Theresia de Vroom is Professor of English and Director of the Marymount Institute for Faith, Culture and the Arts at Loyola Marymount University in Los Angeles, California. She has edited and translated the medieval Netherlandic plays of the Hulthelm MS and was the editor and compiler for In Possession of Shakespeare: Writing Into Nothing. She has written articles on medieval women mystics, beast epics, medieval and Renaissance drama and poetry. In 1998 she was the recipient of the Lois P. and Donald H. Graves Award for Excellence in Teaching.

The William H. Hannon Library fosters excellence in academic achievement through an array of distinctive services that enable learners to feed their curiosity, experience new worlds, develop their ideas, inform their decision-making, and inspire others. The library is open to the public during regular business hours. More information can be found at http://library.lmu.edu

For more information about this event, contact John Jackson, Head of Outreach & Communications for the William H. Hannon Library, at (310) 338-5234 or john.jackson@lmu.edu.

Register
This event content is powered by the Localist Community Event Platform.