Forum: "Healing Moral Injury and PTSD: Ministry to Veterans, their Families and Communities" 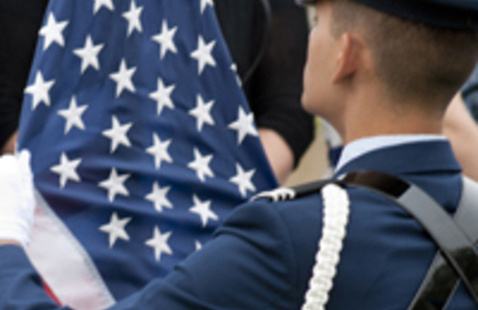 The Wars in Afghanistan and Iraq have been challenging for the nation, especially for military families and their communities. And though our soldiers have begun to return home, the majority of Americans are, unfortunately, unaware or unfamiliar with the mental and spiritual challenges many of them continue to face. As a consequence, the moral injuries of our Veterans remain unresolved.

The reality of moral injury and Posttraumatic Stress Disorder (PTSD), with which many of our Veterans struggle, affects all Americans. How can we best serve these men and women, their families, their communities? How can we contribute to the process of healing?

At this public forum, an interreligious panel of military chaplains and ministers will lead a discussion on the realities of moral injury and PTSD, best practices for ministry to veterans, and the role of spirituality in healing from the respective perspectives of different faith traditions.

Active military, veterans, families, employers, as well as lay and ordained ministers, mental health professionals, community leaders, and anyone simply interested in learning about this important issue, are encouraged to attend and participate. A reception will follow the Q&A in the atrium.

Please contact the LMU Center for Religion and Spirituality at (310) 338-2799 with any questions.

WATCH IT ONLINE
The forum was recorded and posted online for public viewing.  Click here to watch online.

SPONSOR
This forum is generously sponsored by the Martin Gang Institute for Intergroup Relations, a joint venture of AJC Los Angeles and LMU Extension dedicated to the promotion of understanding between religious and ethnic communities in Southern California.

SPEAKERS
Mark Mitchell, M.F.T. (moderator) is a licensed marriage and family therapist, and a graduate of the University of California at Los Angeles (UCLA) School of Management in management development. Mark is a member of the Behavioral Health Team of the Los Angeles Collaborative that examines veteran services, best practices and evidence-based information. He provides staff development, creates seminars and provides coaching for veteran service and religious organizations. In addition, he has a private practice where he sees veterans and their families. See MarkMitchellhelps.com. He is on faculty in the Alcohol and Drug Counseling program in LMU Extension. He can be reached at MarkMitchellSpeaks@gmail.com.

Anne Svensson is the founder and director of Active Duty Families at Saddleback Church, Lake Forest, CA. Active Duty Families is a support group that serves the needs of the families of active duty military. She is a mother of a veteran son. She has been teaching and leading in the Christian community for twenty years. She has experience leading large studies and small groups in spiritual growth. She has served with Bible Study Fellowship and at local churches. She can be reached at activedutyfamilies@gmail.com.

Nathan Graeser, M.Div. is Battalion Chaplain at the 1-144th Field Artillery battalion in Burbank, California. After a successful enlisted career where Nathan experienced the effects of war on his soldiers and unit, Nathan acquired his Master in Divinity at Fuller Theological Seminary, after which he went on to pursue military social work obtaining his Masters in Social Work concentrating on military community organizing, planning, and administration at the University of Southern California. Nathan has been recognized for his innovative approach of interfaith ceremonies as well as his creative and realistic approach to building capacity for mental health providers treating veterans. He has contributed to providing realistic veteran clinical scenarios, as well as creating meaning and holistic life development for Veterans and service members in the Los Angeles area. He currently works as a Project Specialist at the USC Center for Innovation and Research for Veteran and Military Families. Nathan can be reached at graesar@usc.edu.

Amir Hussain, Ph.D. is a professor of Theological Studies at Loyola Marymount University, where he teaches about Islam and world religions. For 2011 to 2015, Amir is the editor of the Journal of the American Academy of Religion, the premier scholarly journal for the study of religion. He is the coeditor for the fourth editions of World Religions: Western Traditions and World Religions: Eastern Traditions, textbooks published in 2014 by Oxford University Press. He is also the coeditor for the third edition of A Concise Introduction to World Religions, which will be published in 2015 by OUP. Prior to those books, he wrote an introduction to Islam for North Americans entitled Oil and Water: Two Faiths, One God (Kelowna: Copper House, 2006). Amir’s undergraduate work was in psychology, and before coming to Los Angeles he managed a program in Canada for people with behavioral issues caused by acquired brain injury (ABI). He is on the board of directors of the Soul Repair Center at Brite Divinity School, where he brings his experiences in ABI to work on PTSD and Moral Injury. Last year, he gave an endowed lecture on Islam and Muslims to the United States Naval Academy.

Rabbi Kevin S. Bemel is a navy chaplain, writer, and cofounder of A Higher Calling: Chaplains for Veterans, which provides no-cost, round-the-clock pastoral counseling to veterans and their family members. His work focuses on building resiliency in the mental and spiritual realms by helping service members develop self-care methodologies to manage work and combat stress, identify and nurture core values, and incorporate spiritual exercise in their daily lives. He blogs at Bemel.com and has written numerous article for ABC-CLIO, Aish.com, and others publications.

Rev. John W. Love, D.Min., the son of an Army surgeon, is a priest of the Archdiocese of Los Angeles, ordained in 1990. He is currently pastor of St. Mark's University Parish in Isla Vista, California, serving the students and faculty of the University of California at Santa Barbara. Fr. Love has a doctor of ministry degree from the Catholic University of America in Moral Formation and is particularly interested in the moral formation of medical students and physicians. Fr. Love is an Air National Guard chaplain (Lt. Col.) at the 146th Air Wing in Channel Islands, California. He has deployed twice to Landstuhl Regional Medical Center (LRMC) in Germany as a staff hospital chaplain for wounded warriors. Fr. Love is also a chaplain for the Order of Malta, a religious order founded in the 12th century for the care of the poor and sick.