Take the Reins: The Current State of US Politics & the Need for Civic Engagement and Public Service A Conversation with Michael Dukakis 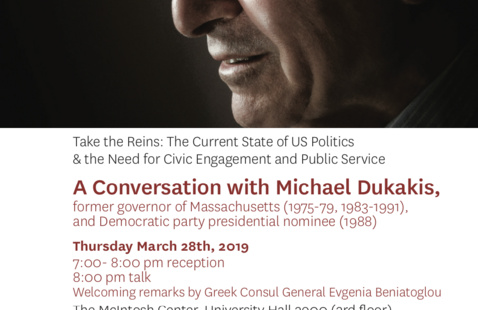 A Conversation with Michael Dukakis, former governor of Massachusetts (1975-79, 1983-1991), and Democratic party presidential nominee (1998). Since his early steps in public service, Michael Dukakis has been committed to government reform, cleansing the political system from corruption, and encouraging young professionals to serve.

As one of the founders of the Commonwealth Organization of Democrats (COD) in the early 1960s, Dukakis actively recruited idealistic, honorable and able professionals to run for office in an effort to reinvigorate local and state government with able, new blood, committed to the ideal of a genuine Democracy with respect for human and civil rights.

Join us for a discussion of the current state of US politics and the need for young people to get involved in public life.