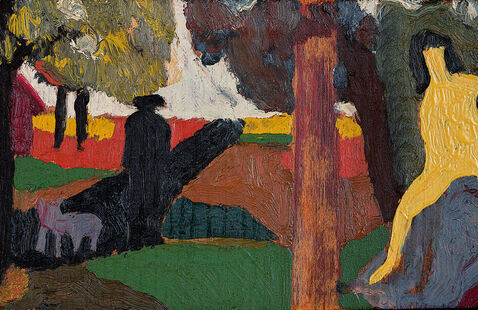 KaleidoLA welcomes art historian Dr. Nicole Woods who will speak about the African American artist Bob Thompson who died in 1966 during a sojourn in Rome. A painter of figurative narratives whose own personal mythology and fierce ambition contains a unique perspective on one of the most turbulent periods of the 20th century, his brief but fervent career produced a staggeringly prolific body of work. Thompson aspired to the complex compositions of Nicolas Poussin, Piero della Francesca, and Francisco Goya, merging religious imagery into a vision of explosive pigment and a singular iconography that belied the contemporary art trends of his day. Crucially, Thompson was dissatisfied with being reduced to one vision of artmaking, or one articulation of identity; his work, likewise resists any single template. This talk revisits canvases currently on view at the Hammer Museum’s retrospective, “Bob Thompson: This House is Mine,” and argues that the artist’s reconfiguration of the Western tradition speaks to a dismantling, even dismembering, of the integrity of a wholly represented “body” by generating forms that demand viewer interaction and introspection of their own bodies.  The monsters, winged creatures, and masked faces that abound in Thompson’s work are part of a spiritualist defense—one that has its roots in rich African-diasporic cultural and political traditions that offer unique insight into contemporary American art histories.

Nicole L. Woods is a historian of modern and contemporary art, criticism, and cultural theory at the University of Notre Dame. Her research focuses on the Euro-American neo-avant-gardes, performance and conceptual art, intersectional feminism, critical race theory, globalism and taste cultures, and the history of photography and time-based media. She is presently writing on African-American painter Bob Thompson and his role in early Happenings, for which she was awarded a Warhol Foundation Arts Writers Grant.

KaleidoLA is the Department of Art and Art History’s annual guest speaker series. For the past ten years, KaleidoLA has been a vital connection between Loyola Marymount University and the Los Angeles arts community. For more information about the November event, contact Dr. Melody Rod-ari, Associate Professor and Chair of Art History, arthistorychair@lmu.edu.