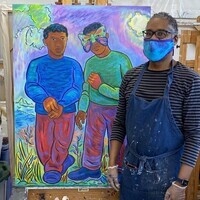 San Francisco-based artist John Bankston is joining us as the fourth KaleidoLA speaker. Using his signature coloring book-style format, he often sends his imaginary, graphically-rendered characters—frequently human/animal hybrids—on journeys of transformation. His depictions can seem childlike at first glance, but they very much mine more adult examinations of our relationships to the subconscious, as well as how we construct our personal identities. His protagonists, who appear in works that range from intimate drawings on paper to ceramics and large-scale paintings, serve as metaphors for male relationships. Bankston will share how he challenges themes of masculinity through exaggeration and with the use of traditional macho accessories juxtaposed with flamboyant and often exuberant head pieces and clothing. The artist often takes the notions of “drag" and “impersonation” to a new level, in order to get to the root of important human traits such as trust, admiration, and love.

John Bankston was born in Benton Harbor, MI, and received his MFA in painting from the School of the Art Institute of Chicago and his BFA from the University of Chicago. In addition to solo exhibitions at the Studio Museum in Harlem, New York, the de Young Museum in San Francisco and the Atlanta College of Art, Georgia, he has participated in many group shows, including “Freestyle,” (the Studio Museum in Harlem); “Thirty Americans,” (The Rubell Family Collection, Miami); “Splat, Boom, Pow,” (Contemporary Arts Museum, Houston); “Seeing Double: Encounters with Warhol,” (The Andy Warhol Museum, Pittsburgh), and “Comic Release,” (Carnegie Mellon University, Pittsburgh), among many others.

Among his numerous awards are a Joan Mitchell Foundation Grant, an Outstanding Ford Foundation Fellowship, a SECA Art Award from the San Francisco Museum of Modern Art, and a Louis Comfort Tiffany Foundation Grant. His works are represented in a number of significant public and private collections, including the Birmingham Museum of Art, Birmingham, AL; the de Young Museum, San Francisco; the Herbert F. Johnson Museum, Cornell University; the Miami Art Museum; the Norton Family Foundation, Santa Monica; the Rubell Family Collection, Miami; the San Francisco Museum of Modern Art; the Studio Museum in Harlem, among others.

KaleidoLA is the Department of Art and Art History’s annual guest speaker series and is a featured program of the College of Communication and Fine Arts (CFA). For the past eight years, KaleidoLA has been a vital connection between Loyola Marymount University and the Los Angeles arts community. For fall 2020, in collaboration with LMU’s Laband Art Gallery, KaleidoLA will thematically center artists whose artwork and lived experiences foreground issues of racial, economic and social justice. In light of COVID-19 restrictions, all lectures will be delivered live on Zoom.