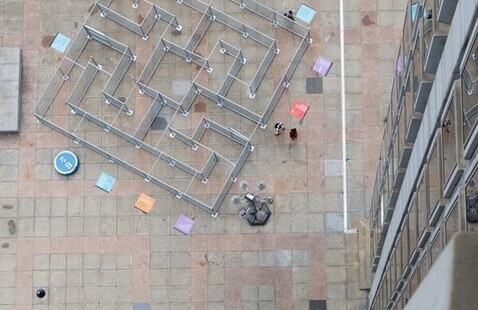 Sam Durant is an interdisciplinary artist whose works engage a variety of social, political, and cultural issues. Exposure to an educational culture emphasizing democratic ideals, racial equality and social justice created the framework for Durant’s artistic perspective.  Durant’s ongoing interest in monuments and memorials began with Proposal for Monument at Altamont Raceway (1999), continued notably with Proposal for White and Indian Dead Monument Transpositions (2005) that recontextualizes memorials to victims of the conquest of North America, and more recently with Proposal for Public Fountain (2015), a marble work depicting an anarchist statue being blasted by a police water canon.  He has recently done major public art projects, Labyrinth (2015) in Philadelphia which addressed mass incarceration and The Meeting House (2016) in Concord, MA that took up the subject of race in colonial and contemporary New England.  In 2007 he compiled and edited the monograph, Black Panther: The Revolutionary Art of Emory Douglas (Rizzoli Intl.) and curated the exhibition of the same name at MOCA, Los Angeles and the New Museum, New York.  Durant has contributed catalog essays, including the forthcoming retrospective Siah Armajani: Follow the Line (Walker Art Center, MN. 2018).  In 2012/13 Durant was an artist in residence at the Getty Museum in Los Angeles where he collaborated with the education department to produce a discursive social media project called What #is a museum? .  Durant’s work has been included in numerous international exhibitions including Documenta 13, the Yokohama Triennial and Biennials such as Venice, Sydney and Whitney.  He has had recent solo exhibitions in Los Angeles, London and Tokyo.  His work can be found in many public collections including Fonds National d’Art Contemporain, UCLA Hammer Museum, Museum of Modern Art, The Museum of Contemporary Art, Project Row Houses, Stedelijk Museum voor Actuele Kunst, and Tate Modern.  He is represented by Blum and Poe, Los Angeles, Paula Cooper, New York, Sadie Coles HQ, London, and Praz-Delavallade, Paris.   Durant teaches at the California Institute of the Arts in Valencia, California.

Exhibitions and Performances Speakers and Seminars