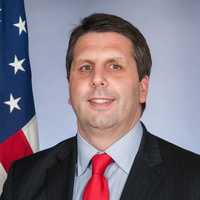 Lecture: "Changes, Opportunities and Concerns on the Korean Peninsula"

The Center for Asian Business D.K. Kim Lecture Series and Center for International Business Education (CIBE) welcome the Hon. Mark Lippert, vice president of international government affairs at Boeing International, for a special talk titled "Changes, Opportunities and Concerns on the Korean Peninsula." He will discuss the following topics:

Prior to joining Boeing, Mr. Lippert had a distinguished career in the United States Government that spanned approximately two decades and included series of senior-level positions across multiple agencies. From 2014-2017, he served as the United States Ambassador Extraordinary and Plenipotentiary to the Republic of Korea, based in Seoul. He graduated Phi Beta Kappa from Stanford University with a B.A. in political science and holds an M.A. in international policy studies from the same institution.