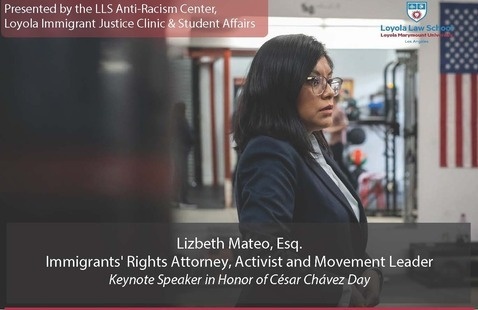 Lizbeth Mateo became known throughout the nation over ten years ago, when she risked her own
deportation by rallying with other undocumented youth to demand immigrant justice. As a member
of "Dream 9," Lizbeth traveled to Mexico and attempted to reenter the US with eight other
undocumented US residents. "Dream 9" was subsequently held in immigration detention for almost
three weeks. Lizbeth was released just in time to return home, pack her bags, and head to law
school. Ever since, Lizbeth's fight to achieve immigrant inclusion has only strengthened. As an
activist, organizer and now lawyer for the rights of immigrants and immigrant workers, Lizbeth's
struggle for immigrant equality, has mobilized a national movement in support of legalization for
undocumented residents in the US.

Please join Lizbeth in conversation with members of the Loyola Immigrant Justice Clinic, about the
intersection of immigrant and racial justice, activism, movement building, and lawyering strategies
that advance these goals.

This was a great event. Lizbeth is such a courageous leader and attorney. Thank you LLS for putting this together.

This was a great event. Lizbeth is such a courageous leader and attorney. Thank you LLS for putting this together.

The link isn't working for me! Is there another link I can access the event through?