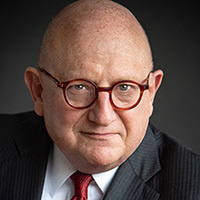 Dr. Neil C. Sandberg, a pioneer in intercommunity affairs and coalition building, spent his career serving the mission of the American Jewish Committee and Loyola Marymount University. Dr. Sandberg was AJC's Western Region Director from 1968 to 1990, and founded its Asia Pacific Institute in 1989. He was the longest serving director of the Martin Gang Institute for Intergroup Relations.

At the U.S. Department of State, he was sworn in as Special Envoy to Monitor and Combat Anti-Semitism (SEAS) on May 20, 2013, and served in that capacity until January, 2017. In his capacity as the U.S. SEAS he was responsible for proposing and coordinating government strategies to counter anti-Semitism in over 50 countries. He tracked worldwide anti-Semitism on an ongoing basis and assisted in the editing of the Department’s Human Rights and International Religious Freedom reports as they relate to anti-Semitism.

Throughout his career he has spoken and written extensively on Jewish history and public policy. Mr. Forman co-edited and wrote for the reference book, Jews In American Politics. He has written articles on these topics for the Encyclopedia Judaica. He also staffed and helped edit the volume, Democrats and the American Idea in his role as a Fellow in American Politics and the Economy at the Center for National Policy.

Tickets are required to attend the Kaufman Family Annual Meeting