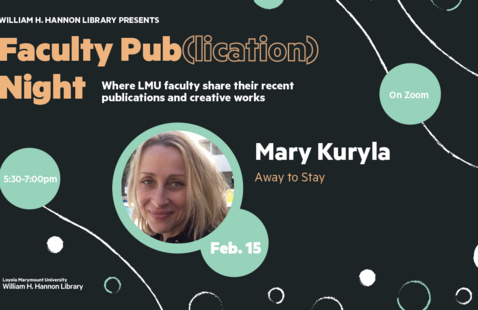 The fifth Faculty Pub Night of the 2021-2022 season features Mary Kuryla, clinical assistant professor of screenwriting (School of Film and Television). She will discuss her recent publication, "Away to Stay."

Students, staff, faculty, alumni, and any members of the public are all invited to the 2021-2022 series of Faculty Pub Night at the William H. Hannon Library. Eight LMU professors are selected annually to discuss their latest publication or project in a comfortable setting and format that welcomes diverse perspectives for an inclusive conversation aimed to educate the entire community. All Faculty Pub Nights are free and open to the public.

Weary of rundown motels and long nights sleeping in her mother's car, Olya wants nothing more than a home. It seems she might finally find one with Jack, her mother's cousin who lives in a tumbledown ranch house in Southern California's Inland Empire. But safety is not all that it seems.

Through Olya’s off beat and probing consciousness, we witness her mother Irina, a Russian émigré obsessed with becoming a prima ballerina and stalking Mikhail Baryshnikov. And Cousin Jack, haunted by demons from the Afghanistan war, who turns his obsession onto his untrainable dog named Bird that he kidnapped from the Riverside Police Department. To Olya, who carries the Good Book inside her head and views her surroundings through the scrim of Biblical wisdom, Bird is Job on four legs.

Though baffled by the world of adults, Olya also sees through so much of their deluded misbehavior. What’s more, she is open to revelation, as in the discovery beneath Jack's house of a crack in the foundation that speaks as the mouth of God challenging her to stay. As tension builds to catastrophe through the constant ratcheting of the central triangle of Jack, Irina, Olya, the house is struck by an earthquake. The characters are coalesced as a family only as their house is torn asunder.

"Away to Stay" burns with the urgency of its young narrator in its exploration of the precarity of shelter and home in the life of an immigrant and American veteran working family.

Mary Kuryla’s collection "Freak Weather: Stories" was selected by Amy Hempel for the Grace Paley Prize in Short Fiction and was published by the University of Massachusetts Press in 2017.

Her stories have received The Pushcart Prize and the Glimmer Train Very Short Fiction Prize and have appeared in Conjunctions, Pleiades, Agni, Witness, Epoch, Shenandoah, Denver Quarterly, The New Orleans Review, and Strange Horizons, Greensboro Review, Alaska Quarterly Review, and elsewhere.
Kuryla co-authored a series of children’s books with Newbery Honor winner Eugene Yelchin, including "The Next Door Bear", "The Heart of a Snowman", and "Ghost Files: The Haunting Truth", all with Harper Children’s Books.

As a filmmaker, Kuryla’s feature film, "Freak Weather" premiered at the Toronto International Film Festival and was in competition at the International Film Festival Rotterdam. Her award-winning short film "Memory Circus" premiered at Sundance. Several of Kuryla’s short stories have been adapted into award-winning films. She is in preproduction on her second feature film, "Jorie Lee Crosses the Line."

In screenwriting, Kuryla has written screen adaptations, including Gordon Lish’s "Dear Mr. Capote" for John Malkovich to direct, as well as screen adaptations for Mr. Mudd Films, United Artist and MGM, among others. Her first feature, "Bunny Girl" was optioned by Generation Films. She has written a screen adaptation of her novel, "Away to Stay" for the actor John Carroll Lynch to direct. Kuryla was a consulting story editor for the WGN TV one-hour serialized drama, Salem.

For more information about this event, contact John Jackson, Head of Outreach & Engagement for the William H. Hannon Library, at (310) 338-5234 or john.jackson@lmu.edu.