Opening Reception for "Making a Scene: The Process of Stage Design" 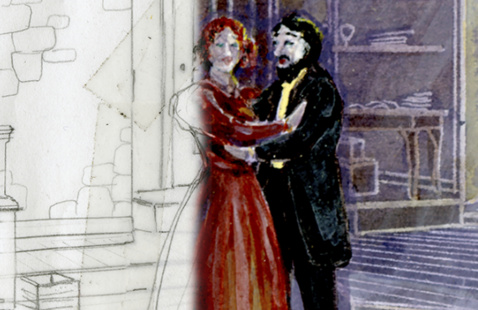 Please join us on February 7, 2019 at 5:30 p.m. as we celebrate the opening of our Spring 2019 Archives and Special Collection exhibition, "Making a Scene: The Process of Stage Design." All LMU students, faculty, staff, and guests are welcome. The event will take place in the William H. Hannon Library's Von der Ahe Family Suite. RSVP Today!

The Spring 2019 exhibition celebrates the career of Charles E. Erven, professor of theatre arts at Loyola Marymount University. Highlights from his collection, recently donated to Archives and Special Collections, are on display, taking us through the creative process of stage design from start to finish. The opening reception will feature a panel discussion, moderated by Professor Erven, between professionals with a variety of experiences within theater about their careers. Following the talk, guests will be encourage to explore the exhibition and partake in food and drink, courtesy of the William H. Hannon Library and the Department of Theatre Arts.

Charles Erven has designed over 230 productions and is currently a member and trustee of the Western Region Board of the United Scenic Artists of America Local 829. His work has been seen in multiple venues, both professional and academic, in the United States, Europe, and Central Asia. His work has been exhibited at the Prague Quadrennial and the Milwaukee Art Museum.

Pamela Shaw, associate professor at Santa Barbara City College, has extensive experience in costume design. She worked as Assistant Costume Designer for the television show “The Vampire Diaries” and for the film “The Artist” which won a 2011 Academy Award for Best Costume Design. She regularly designs costumes for the Rubicon Theater, served two terms as Vice President of the Costume Designers Guild, and is currently chair for the Western Region Board of United Scenic Artists.

Danila Korogodsky, graduate of the Leningrad Theater Academy, has experience working as a director and stage designer all over the world. He taught set designer at California State University, Long Beach from 1996 to 2014 and since 2005 has been the Artistic Director of Theater Pokoleniy in St. Petersburg, Russia.

Christian Lebano has been the Artistic Director of Sierra Madre Playhouse since 2014, during which time he has built it into one of the leading Intimate Theaters in Los Angeles. Under his leadership, it has earned 2 Ovation awards out of 8 nominations for 6 different shows, its first LA Times Critics Choice listing, and many Broadway World and Stage Scene LA awards and nominations. He has experience directing, producing, and acting.

J Mills Fagan graduated from Loyola Marymount University in 2004 and went on to earn an MFA from DAMU, the Czech Academy of Art. He uses his experience in theatrical and film set design, men’s fashion, and marking to bring a dramatic flair to his creative practices.

Exhibitions and Performances Speakers and Seminars