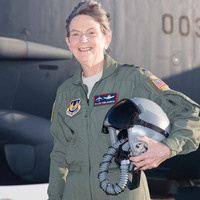 "The Only Woman in the Room"

Ellen Pawlikowski, a retired four-star general with the United States Air Force, shares her experiences as a woman in engineering and in the military at a time when few women were pursuing these careers. During her 40 years in the Air Force, she was instrumental in the changes resulting in women’s presence in all Air Force careers and women reaching the highest ranks. In addition to her experiences, Pawlikowski shares her impressions of women’s impact in what have traditionally been male-dominated professions.

This event is presented by the Society of Women Engineers and Women in Defense Greater Los Angeles Chapter, in collaboration with Loyola Marymount University Frank R. Seaver College of Science and Engineering.