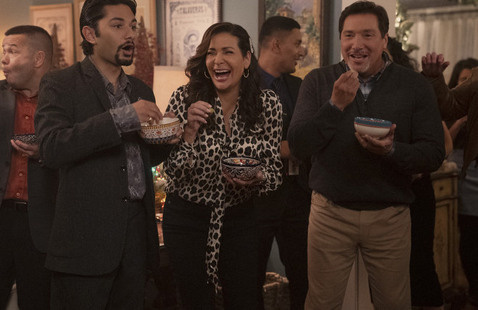 Join SFTV for a screening of the first two episodes of WITH LOVE along with a Q&A with LMU alum Gloria Calderón Kellett!

House opens at 7 PM. Priority admittance will go to SFTV students who RSVP. There will be a non-SFTVstandby line. Seats are not guaranteed.

Amazon Original Series With Love is a one-hour romantic comedy, written and created by Gloria Calderón Kellett that features the Diaz siblings, Lily (Emeraude Toubia) and Jorge Jr. (Mark Indelicato), who are both on a mission to find love and purpose. Each of the five episodes, set during a different holiday throughout the year follows Lily on her transition from being newly single, to caught in a love triangle with two sexy suitors (Desmond Chiam, Rome Flynn), brother to Lily, Jorge Jr., as he introduces his new boyfriend Henry (Vincent Rodriguez III) to the family for the first time on Christmas Eve/Nochebuena, and the Diaz's cousin, Sol Perez (Isis King), as they balance a potential blossoming relationship with their coworker Dr. Miles Murphy (Todd Grinnell). The patriarchs of the family, Beatriz (Constance Marie) and Jorge Sr. (Benito Martinez) as they also deal with their own relationship challenges, in finding new ways to keep the spark alive in their 50’s. The Diaz family takes a wild ride through all the highs and lows of life, during some of the most heightened holidays of the year. With Love will premiere on Prime Video on Friday, December 17, in more than 240 countries and territories worldwide.

Join us for the Q&A after the film to learn more about:

Q&A audience questions must be submitted when you RSVP. Deadline for new questions is 11/29.

Gloria Calderón Kellett is the executive producer, co-creator, co-showrunner, director, and actress on the critically acclaimed sitcom One Day at a Time. Coming later this year, her new Amazon Original series, With Love, is the first series coming out of an overall deal between her company and Amazon Studios. Last year, Calderón Kellett sold her first feature film, We Were There Too, which she will write and produce with Natasha Rothwell (Insecure) for HBOMax. Described as a classic 80’s coming of age story set in a John Hughes’ inspired Chicago, the film expands the Brat Pack genre by refocusing the narrative on those traditionally buried in the background –the Brown kids, the LGBTQ kids, the Black kids, the real outsiders –because they were there, too. Additionally, Calderón Kellett and her production company, GloNation, began a new overall deal with Amazon Studios, where she is busy working on an exciting new slate of projects. The proud daughter of Cuban immigrants, Calderón Kellett graduated from Loyola Marymount University and went on to earn a master’s degree in Theatre from the University of London, Goldsmith's College. Calderón Kellett spent her early years as a writer/producer on numerous shows, including Devious Maids, Rules of Engagement,and How I Met Your Mother. Her acting credits include Jane the Virgin, Angie Tribeca, Dead To Me, How I Met Your Mother, One Day at a Time, and United We Fall, for which she also wrote and directed. One of her proudest moments was appearing as a narrator on Drunk History(New Orleans). Calderón Kellett has directed episodes of One Day at a Time, Mr. Iglesias, Merry Happy Whatever, United We Fall and the Mad About You revival. She is an ambassador for the non-profits ReFrame Project for Gender Parity and the National Women’s History Museum. She is also a founding member of the Untitled Latinx Project, an advocacy group of Latina showrunners, who most notably put together a “Dear Hollywood” letter about how to better address the issues of the Latino community. With BuzzFeed/Pero Like, she launched a “Hollywood 101” web series master class for new writers.Awards for her work include The Television Academy Honors, Mental Health America Media Award, ALMA Award, Imagen Award, Vanguard Award, NHMC Award, Sentinel Award, and The Voice Award. Calderón Kellett is also one of the few creatives to have the distinction of receiving a 100% rating on Rotten Tomatoes for One Day at a Time. She has been honored as anindustry leader by The Hollywood Reporter in their “Top Women in Entertainment” issue, the THR100 list issue, their “50 Agents of Change” issue and is a consistent figure in the Industry Producer’s Impact Report.

MODERATOR: Dea Vazquez joined Film Independent in 2014 and currently serves as Project Involve Manager, overseeing Film Independent’s signature mentoring program that fosters the future generations of visual storytellers from underrepresented communities with the goal of a more inclusive industry. Prior to her role with Project Involve she was the Film Independent Artist Development Associate where she coordinated day-to-day operations for the Artist Development labs and programs. Dea has served on juries for various organizations including Women in Film and the Shift Film Fund. Before joining Film Independent, Dea was the Coordinator at The Murtha Skouras Agency, a top Below-the-Line talent agency, and prior to that, she was the in-house Production Coordinator at Colibri Films, a commercial production company for the Hispanic Market. She holds a BA in English Literature from Boston University.