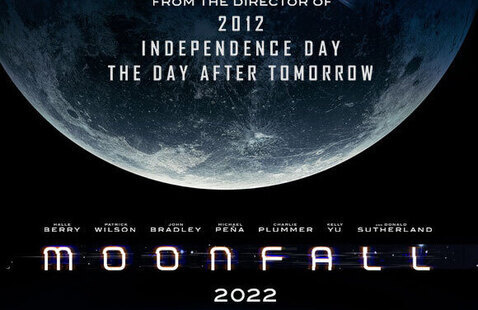 House opens at 7 PM. Priority admittance will go to SFTV students who RSVP. There will be a non-SFTV standby line. Seats are not guaranteed.

Directed by Roland Emmerich (2012, Independence Day, The Day After Tomorrow)

The world stands on the brink of annihilation when a mysterious force knocks the moon from its orbit and sends it hurtling toward a collision course with Earth. With only weeks before impact, NASA executive Jocinda "Jo" Fowler teams up with a man from her past and a conspiracy theorist for an impossible mission into space to save humanity.

Join us for the Q&A after the screening with Harald Kloser (Writer/Producer), Robby Baumgartner (DP), and Peter Travers (VFX Supervisor) to learn more about:

Harald Kloser is known for his work as a Composer, Writer, and Producer of Hollywood blockbuster films such as 10,000 B.C. (2008), 2012 (2009), Independence Day: Resurgence (2016), Midway (2019), and most recently, Moonfall (2022) starring Halle Berry, Patrick Wilson and John Bradley. Born in Hard, Austria, he began his composing career in the world of pop and rock music, writing and producing for notable artists, including Elton John, Falco, Al Jarreau, Tom Waits, and Jose Feliciano. When Roland Emmerich brought in Kloser to score The Day After Tomorrow (2004), it would be the beginning of a lifelong friendship and creative partnership. In 2009, Kloser formed Street Entertainment, a motion picture and television production company. Through Street Entertainment, Kloser has developed numerous Hollywood classics that have collectively grossed over $1 billion. He is currently in development on the upcoming historical epic Those About to Die in partnership with Roland Emmerich, Gianni Nunnari’s Hollywood Gang Productions, and Stuart Ford’s AGC Studios.

ROBBY BAUMGARTNER (Director of Photography) began his film career 28 years ago in New York City. His interest in lighting inspired him to choose the unconventional route to DP via gaffing. This career path allowed him to light films and learn from some of the most talented DPs in the business, including Rodrigo Prieto, Chris Menges, Robert Elswit, Dante Spinotti, Darius Khondji, Janusz Kaminski and Emmanuel Lubezki. Some of these films include 8 Mile, starring Eminem and Kim Basinger; Spike Lee’s 25th Hour; 21 Grams with Sean Penn and Naomi Watts; Babel, directed by Alejandro G. Iñárritu; Three Burials of Melquiades Estrada; and There Will be Blood, helmed by Paul Thomas Anderson. In between gaffing gigs, he took every opportunity to DP or camera-operate on feature films, 2nd-unit photography, commercials and shorts. In 2008, There Will Be Blood, shot by Robert Elswit, won the Oscar® for Best Cinematography, the highest honor for any DP/Gaffing team. That event was the impetus for Robby to stop gaffing and DP exclusively. In 2009, Robby joined the International Cinematographers Guild as a DP. Since then he has gone on to shoot 2nd unit on both Hunger Games l and Hunger Games ll, as well as Water for Elephants and Argo, amongst other films. For the last five years he has been concentrating on shooting main unit for films such as The Guest and Blair Witch (2016), and recently completed Blindspotting, which was selected for competition in the US Dramatic category at the 2018 Sundance Film Festival. He was DP on A Call to Spy (2019), a historical drama inspired by the true story of three women who worked as spies during WW2, directed by Lydia Dean Pilcher. He first worked with Roland Emmerich on the WW2 action drama Midway, and his second collaboration with the director is Emmerich’s upcoming sci-fi disaster epic MOONFALL.

At the ripe age of five, Pete Travers planted the seeds of his career as an artist, when he convinced his parents to take him to the theater to see Godzilla vs Megalon in 1976, and immediately began sketching Godzilla with furious abandon. Pete maintained this focus and embarked on a career in the Visual Effects Industry in 1993. Leaning on his bachelor’s degree in Mechanical Engineering from Worcester Polytechnic Institute, Pete used his engineering skills to collaborate with an intimate software development team at Wavefront Technologies, in Santa Barbara to produce Dynamation. Dynamation eventually was absorbed into Maya, the industry’s software animation standard. Pete then moved into feature film post production. In Crimson Tide (1995), Pete was an FX animator for the underwater simulations. Shortly after, Pete started his own company, Shadowcaster in 1997, in which he contributed to the painted world sequence in What Dreams May Come (1999). In 2000, Pete joined the team at Sony Pictures Imageworks, where he worked for over 17 years as a Visual Effects Supervisor, Digital Effects Supervisor and Designer. His contributions include supervision on numerous films such as Harry Potter and the Sorcerer’s Stone, Stuart Little 2, Lord of the Rings: The Two Towers, Matrix Reloaded, The Aviator, Watchmen, Zookeeper, Captain America 2: The Winter Soldier, Guardians of the Galaxy, and many more. After spending a year in China working on an international film, Pete joined Centropolis Entertainment in 2019 and supervised Roland Emmerich’s WWII epic Midway. Pete then rolled right into Emmerich’s next sci-fi disaster film Moonfall, slated for theatres in February of 2022. In his spare time, Pete sketches the mysterious and elusive Bigfoot by working with actual eyewitnesses of the creature. Much like a police sketch artist, Pete creates renderings from actual testimony. Pete has produced hundreds of sketches and has worked with over 40 eyewitnesses. Pete holds the title of the official Bigfoot Sketch Artist in the Bigfoot community. Intrigued and fascinated by this creature, Pete also wrote a fictional novel titled No Return. The synopsis centers around an unfortunate encounter with Sasquatch in the wilderness of central Idaho. Whether it be drawing a mysterious creature, supervising a team of artists, or engineering the best solution to a problem, Pete will continue to give it his all with any journey he engages upon.