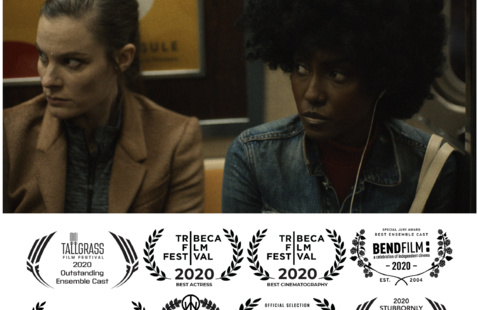 A closely observed psychological portrait of four women, whose lives are bound together by an incident on the New York City subway.

Join us to learn more about:
- The film’s very successful festival run
- Adapting your own story for the screen
- The unique team structure that brought this film together

David Gutnik is a Russian-American writer and director from Brooklyn, New York. MATERNA, Gutnik's debut feature film, was awarded Best Actress and Best Cinematography at the 2020 Tribeca Film Festival, where Gutnik was also nominated for Best New Director. Gutnik is also the editor of several acclaimed features, including Christina Choe’s 2018 Sundance Award-Winning NANCY. He was a 2017 Sundance Institute Fellow and received his MFA in Film at Columbia University.

A 2019 Independent Spirit Award nominee, Cardenas’ notable producing credits include Augustine Frizzell’s NEVER GOIN’ BACK (Sundance ‘18), starring Maia Mitchell, Camila Morrone and Kyle Mooney; David Lowery’s A GHOST STORY (Sundance’17), starring Rooney Mara and Casey Affleck (both distributed by A24); and Daniel Laabs’ JULES OF LIGHT & DARK (Best US Narrative Feature at Outfest 2019). A 2018 Rotterdam Lab and 2017 Film Independent Lab Fellow, Liz also participated in the 2018 Producers Workshops and Network at the Marché du Film at the Cannes Film Festival on behalf of Cinemart (IFFR.). Included in LATINXT 2019, a highly curated list of emerging Latino creators, Liz is from Texas, based in LA, and represented by Authentic Talent and Literary Mgmt.

McEvoy is a New York based producer. She produced RADIUM GIRLS, starring Golden-globe nominee Joey King and Abby Quinn (2018 Tribeca Film Festival), which is being released by Juno Films and Netflix this summer. McEvoy produced the short film CHEER UP BABY, directed by Adinah Dancyger and starring Bobbi Menuez (Sundance 2018). She is currently in post-production on the feature PETRA VACK, directed by Betsey Brown, starring Peter Vack. McEvoy worked as Creative Executive at Cine Mosaic, where she worked on over 9 films, including the Academy Award-nominated CUTIE AND THE BOXER, THE LUNCHBOX, and the Disney film QUEEN OF KATWE. She is from Ann Arbor, where she also attended college at the University of Michigan.

Assol Abdullina is a NYC based writer and actress from Kyrgyzstan. Abdullina won the Best Actress Award for Materna at the 2020 Tribeca Film Festival, where she was also nominated for Best Screenplay and the Nora Ephron Award. She is a recent graduate of The New School for Drama. Film: FIRST SNOW, HE/SHE/EXIT/SIGNS, ONLY SOLOMON LEE, THE BIRDS OF PARADISE. Theater: Arcticfox in Annie Dorsen’s”The Slow Room” at Performance Space New York; Mandy in Donald Margulies’s “Time Stands Still” at 13th Street Rep. She lives in Queens, New York.

MODERATOR: Heather Taylor is a writer/ director originally from Edmonton, Alberta, Canada, and is currently staffed on season two of THE HARDY BOYS (Hulu). Her podcast, ANOMALY, is an official selection of the 2021 Tribeca Film Festival. Her next feature film, FAMILY SEDUCTIONS, produced by Neshama Entertainment and MarVista Entertainment, will be released in 2021. Heather graduated with a Masters in Screenwriting from City University, London. She is an alum of the 2019 Bell Media Prime Time TV program (in association with ABC Signature Studios) and the 2019 Corus Writer’s Apprentice Program. She was a finalist in the Austin Film Festival Screenplay Awards (2019), and a finalist in the PAGE Awards (2020). Heather is an idea machine, the Indiana Jones of research, and builds supernatural worlds with real-world consequences. See more of her work on HeatherATaylor.com.