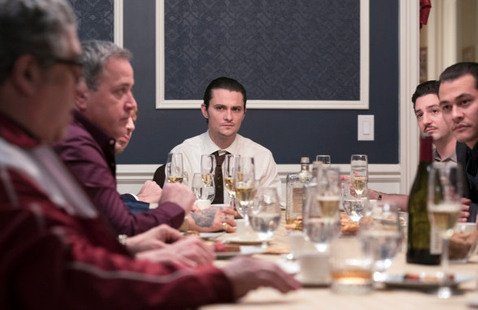 On the 10th anniversary of his father’s death, Giovanni reluctantly accepts the task of bringing a cake to the home of his uncle, a mob boss, for a celebration. Just two hours into the night, Gio’s life is forever changed.

Join us to learn more about:
- The experience of directing a first feature film

- Casting and working with an amazing group of actors

And MORE! Bring your questions!

Jimmy Giannopoulos is a New York based director and producer. Jimmy was in a band, Lolawolf, with Zoe Kravitz for 6 years before pursuing his lifelong dream of directing a film. Jimmy has toured the world as a musician and producer. He has written records and collaborated with artists like Miley Cyrus, Jack Antonoff, Rae Sremmurd, A$AP Rocky, Kid Cudi, Lily Allen, The Strokes and many more. He has also directed music videos starring Miley Cyrus, A$ AP ROCKY, Alia Shawkat, Karl Glusman, and Penn Badgley. All the while, honing his craft as a screenwriter, behind the camera and overall creative.

Siena Oberman is a producer that grew up in Los Angeles and went to USC and LMU for film and business school, where she received a scholarship from the Red Cross for humanitarian leadership through media. She recently started Artemis Pictures, which was a part of Mainstream and is currently in post on The Birthday Cake, a twist on the mob genre starring Shiloh Fernandez, Emory Cohen, Ewan McGregor and Val Kilmer. She also Executive Produced Skin based on the Oscar winning short film directed by Guy Nattiv. Prior to Artemis she was a Development Executive at Yale Productions and interned for Paramount, Plan B, UTA, and IM Global. In 2019 she was awarded Diversity in Cannes Top 10 Women in Film to Watch.