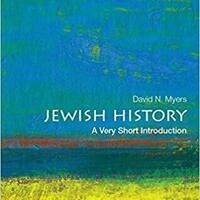 Join us on February 9 at 2:00 p.m. for a discussion of Jewish History: A Very Short Introduction by David N. Myers.  The discussion will be lead by Amir Hussain, (LMU Department of Theological Studies).

The Sunday Jewish Book and Discussion Group is free and open to the public. Light refreshments and riveting conversation will be served. Please RSVP by contacting Rhonda Rosen at rrosen@lmu.edu or 310-338-4584. This event will take place in the library’s Von der Ahe Family Suite (level 3).

How have the Jews survived? For millennia, they have defied odds by overcoming the travails of exile, persecution, and recurring plans for their annihilation. Many have attempted to explain this singular success as a result of divine intervention. In this engaging book, David N. Myers charts the long journey of the Jews through history. At the same time, it points to two unlikely-and decidedly this-worldly--factors to explain the survival of the Jews: antisemitism and assimilation. Usually regarded as grave dangers, these two factors have continually interacted with one other to enable the persistence of the Jews. At every turn in their history, not just in the modern age, Jews have adapted to new environments, cultures, languages, and social norms. These bountiful encounters with host societies have exercised the cultural muscle of the Jews, preventing the atrophy that would have occurred if they had not interacted so extensively with the non-Jewish world. It is through these encounters--indeed, through a process of assimilation--that Jews came to develop distinct local customs, speak many different languages, and cultivate diverse musical, culinary, and intellectual traditions. Left unchecked, the Jews' well-honed ability to absorb from surrounding cultures might have led to their disappearance. And yet, the route toward full and unbridled assimilation was checked by the nearly constant presence of hatred toward the Jew. Anti-Jewish expression and actions have regularly accompanied Jews throughout history. Part of the ironic success of antisemitism is its malleability, its talent in assuming new forms and portraying the Jew in diverse and often contradictory images--for example, at once the arch-capitalist and revolutionary Communist. Antisemitism not only served to blunt further assimilation, but, in a paradoxical twist, affirmed the Jew's sense of difference from the host society. And thus together assimilation and antisemitism (at least up to a certain limit) contribute to the survival of the Jews as a highly adaptable and yet distinct group.

About the William H. Hannon Library

The William H. Hannon Library fosters excellence in academic achievement through an array of distinctive services that enable learners to feed their curiosity, experience new worlds, develop their ideas, inform their decision-making, and inspire others. The library is open to the public during regular business hours. More information can be found at library.lmu.edu.