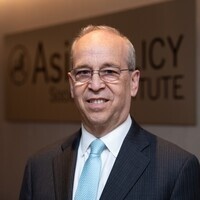 What's Next for US-China Relations?

Danny Russel is an American diplomat who served as Assistant Secretary of State for East Asia and Pacific Affairs under President Obama. Prior to this appointment, he worked at the White House as Special Assistant to the President and National Security Council (NSC) Senior Director for Asian Affairs. During his tenure, he helped formulate President Obama's strategic rebalance to the Asia Pacific region, including efforts to strengthen alliance, deepen US engagement with multilateral organizations, and expand cooperation with the emerging powers in the region.

Currently, Russel is the Vice President for International Security and Diplomacy at the Asia Society Policy Institute (ASPI). Previously, he served as a Diplomat in Residence and Senior Fellow with ASPI for a one-year term. He is a career member of the Senior Foreign Service at the US Department of State, and he was educated at Sarah Lawrence College and University College, University of London, UK.

Presented by the Global Policy Institute at Loyola Marymount University and the Institute for Leadership Studies, in conjunction with Pomona College. Co-Sponsored by Global-Local Initiatives, Asian Media, Center for Asian Business, Center for International Business Education, and the departments of Asian and Asian American Studies, History, International Relations, Political Science, and Sociology.