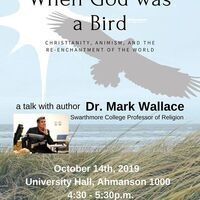 When God Was A Bird: Christianity, Animism, and the Re-Enchantment of the World

Dr. Mark I. Wallace is a Professor of Religion and Environmental Studies at Swarthmore College and core faculty for the U.S. State Department's Institutes on Religious Pluralism at Temple University. He will speak on his most recently published Book: When God was a Bird: Christianity, Animism, and the Re-enchantment of the World.

In a time of rapid climate change and species extinction, what role have the world's religions played in ameliorating—or causing—the crisis we now face? Religion in general, and Christianity in particular, appears to bear a disproportionate burden for creating humankind's exploitative attitudes toward nature through unearthly theologies that divorce human beings and their spiritual yearnings from their natural origins. In this regard, Christianity has become an otherworldly religion that views the natural world as "fallen," as empty of signs of God's presence.

And yet, buried deep within the Christian tradition are startling portrayals of God as the beaked and feathered Holy Spirit – the "animal God," as it were, of historic Christian witness. Through biblical readings, historical theology, continental philosophy, and personal stories of sacred nature, this book recovers the model of God in Christianity as a creaturely, avian being who signals the presence of spirit in everything, human and more-than-human alike.

Mark Wallace's recovery of the bird-God of the Bible signals a deep grounding of faith in the natural world. The moral implications of nature-based Christianity are profound. All life is deserving of humans' care and protection insofar as the world is envisioned as alive with sacred animals, plants, and landscapes. From the perspective of Christian animism, the Earth is the holy place that God made and that humankind is enjoined to watch over and cherish in like manner. Saving the environment, then, is not a political issue on the left or the right of the ideological spectrum, but, rather, an innermost passion shared by all people of faith and good will in a world damaged by anthropogenic warming, massive species extinction, and the loss of arable land, potable water, and breathable air. To Wallace, this passion is inviolable and flows directly from the heart of Christian teaching that God is a carnal, fleshy reality who is promiscuously incarnated within all things, making the whole world a sacred embodiment of God's presence, and worthy of our affectionate concern.